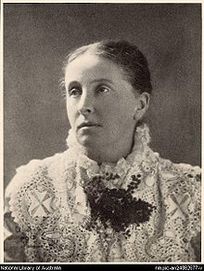 Overall she wrote more than twenty-five works of fiction, three volumes of poetry and two autobiographical works. Many of her novels were serialised in Australian newspapers, and were never published in book form.

As the wife of the Rev'd George Cross she lived in the Vicarage at Holy Trinity, Williamstown from 1893-1909, where she wrote some of her most significant work.


She is reputed to have been a great friend of Jeannie Gunn ("Mrs. Aenas Gunn"), who is said to have written some of her famous work "We of the Never Never" on the verandah of the Holy Trinity vicarage.
(From Wikipedia)

The Williamstown Literary Festival has run the Ada Cambridge Prize for biographical short story writing since 2004, in honour of one of Williamstown's most famous daughters. Each year, the winner is announced at the opening of the festival, and the short list of stories will be available as a booklet.

One of our parishioners, Alison Brideson (who writes as Alison Stuart), was a finalist in the first Ada Cambridge Prize and her story "Home Leave" can be found in Tower of Tales, Collected Short Stories

Recently Hobsons Bay City Council has announced that the refurbished square in front of the Williamstown Town Hall will be named in honour of Ada Cambridge.

All text and photographs within this site are copyright Holy Trinity Anglican Church Williamstown, unless otherwise attributed.