Holy Trinity is blessed with a collection of beautiful stained glass windows. Visitors to the Church will find a laminated guide to this "Gallery of Glass" as they enter the church.

Most of the windows came from the Melbourne workshops of Brooks, Robinson and Co. which began in 1854 as import agents, dealing in window and table glass and interior-decorating supplies. They later moved into commercial glazing, particularly shopfronts, but did not produce stained-glass windows until the 1880s. Their big opportunity came in the 1890s when they were engaged to install St Paul's Cathedral's great cycle of stained-glass windows, made by Clayton & Bell in London. Their stained-glass studio flourished, and after the closure of Ferguson & Urie attained a dominant position in the trade. Almost all the Australian glass artists of the early 20th century passed through their studio. Their work is represented in the Princess Theatre and St John's, Toorak. However, the stained-glass studio closed after Brooks Robinson was taken over by Email Pty Ltd in 1963. (From Melbourne... click HERE for more information on stained glass makers in Melbourne)

London and German trained William Montgomery arrived in Melbourne in 1887 and set up at 164 Flinders Street, bringing the latest in European style and design and achieving instant success with his church, public building and domestic designs. He worked equally for Catholic and Protestant denominations, his windows being found in many churches and mansions 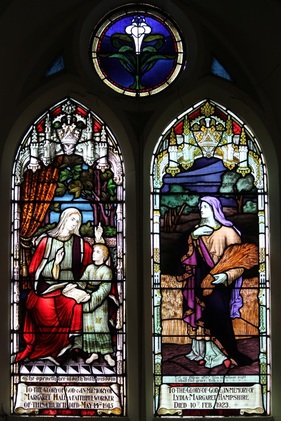 The first twin window on the north wall (near the Choir Vestry) represents the ideal  Mother - RUTH  and her son. It was given in memory of Margaret  Hall  May 1915.

The second twin window is Ruth  the Gleaner.  To the memory of Lynia  Marret  Hampshire    10-2-1923.  Parishioner ladies  of  Holy Trinity.

This is, we believe, the first stained glass window given  to Holy Trinity as a memorial window.

The window was made by Montgomery. 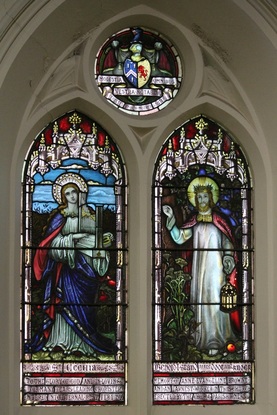 “Behold; I  stand at the door and knock If anyone hears my voice I will go in!” Revelations

The window was a memorial to her Sister given by Miss Ada  Brown who was a faithful organist at Holy Trinity for 40 Years.

The "Waller" Window - our Christmas window 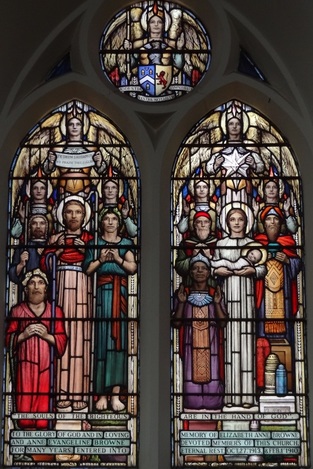 ​This stunning window, in the Art Deco style, was commissioned from one of Australia’s most famous stained glass artists, Napier Waller (see left).

The Nativity of our Lord:  This Window tells the events of Christ`s birth. 2  Arch Angels , Mother Mary  Joseph and Christ.,  2 shepherds,   3  Kings  and angels.

The Roundel is the Brown Family Crest.

Born in Victoria in 1893, Napier Waller trained as an artist. He married fellow art student, Christian Yandell in 1915.

He lost his right arm  at the battle of Bullecourt and on his return to Australia taught himself to paint left handed. He preferred to work in stained glass and murals and his work can be found in the Melbourne Town Hall, the State Library and Myer Emporium . His most stunning mosaics grace the Hall of Memory at the Australian War Memorial.

He was awarded an OBE in his lifetime and died in 1972.

We are incredibly honoured to have a Waller window in our own Gallery of Glass.
MARTHA AND MARY - Evolution of a window
(From the State Library of Victoria...) 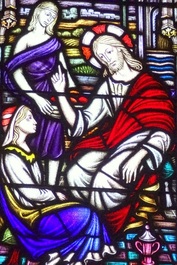 More information on the windows...

STAINED GLASS AUSTRALIA :  FLICKR PHOTO ALBUM
Ferguson and Urie:  Post on the Holy Trinity Windows
Photos on this page are courtesy of Ray Brown. The photo used in the header is by local photographer George Dipa Jekic
All text and photographs within this site are copyright Holy Trinity Anglican Church Williamstown, unless otherwise attributed.